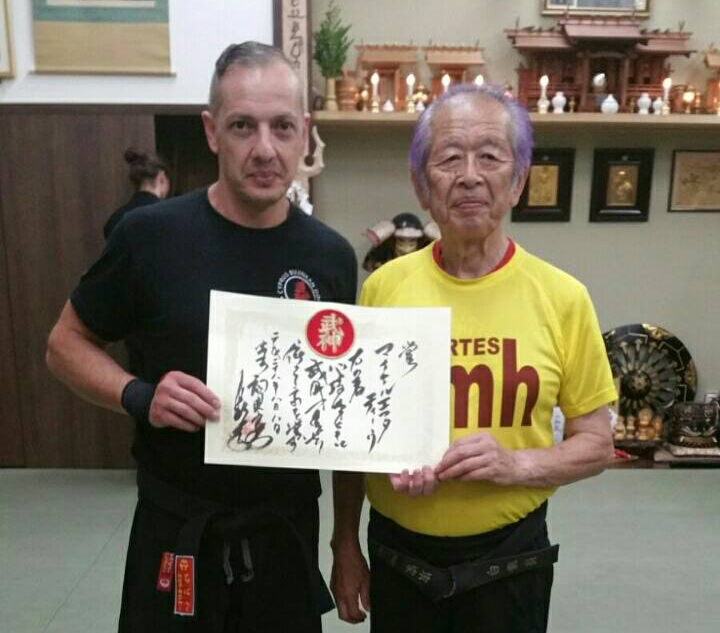 Sensei Michael Efstathiou has travelled abroad to the USA, UK, Spain, Italy, Greece, and Israel training with various fighting systems and Ninjutsu instructors. Through his travels he made many contacts from the countries he traveled as well as his recent trips to Japan. He joined Daikomyosai 2006 in Japan where he had the opportunity to pass the Godan (Sakki) Test and successfully received his 5th Dan.

In July 2009 with a group of students, he traveled to Japan and trained at Honbu Dojo under Soke Masaaki Hatsumi, where he earned his 8th Dan directly from Soke Hatsumi.

In April 2015 on yet another trip to Japan with numerous students, he received the highest rank possible Judan Kugyo Happo Biken (widely known as the 15th Dan), becoming the first Cypriot Master in Ninjutsu.

On August 2nd 2016 while in Japan and after a personal invitation by Soke Masaaki Hatsumi to his office, Sensei Michael Efstathiou was awarded the "Shin Gi Tai Bufu Ikkan Menkyo". This award according to the Grand Master himself, is given out to his best and most loyal students. These are only practitioners who have achieved the highest level of development both in Budo and life in general.

Sensei Michael Efstathiou received "Dai Shihan" (Senior Master) in July 2018.  A Dai Shihan is a direct representative for Soke in his absence and is responsible for a specific area of a country, or for an entire country.

His lust for knowledge was what made Sensei Michael Efstathiou search for the higher knowledge and higher meaning of the martial arts. This is what lead him to search for the true meaning of budo leading him onto the path of Ninjutsu and the Bujinkan (”Divine Warrior”) Dojo. What he found through the Bujinkan Dojo was a path to enlightenment through the martial arts. A path which must be walked and experienced by each one of us in order to be truly understood. A path which reveals many truths and opens many doors. A path which opens your mind and develops your spirit. In his free time Sensei Michael Efstathiou studies philosophy and metaphysics.